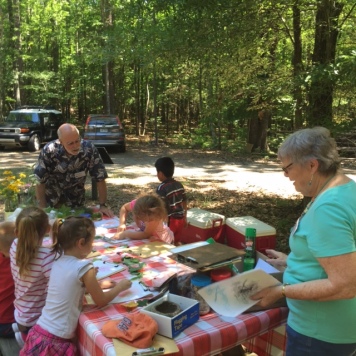 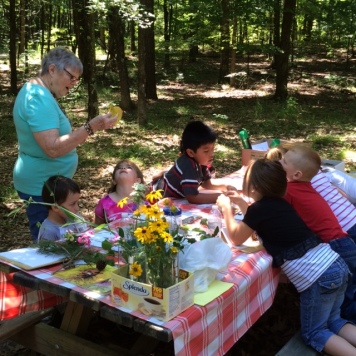 June 10, 2016…the day 55 summer school kids K-8 under the direction of Kathi Beavers, the manager of the Clinton program, arrived at the South Fork kiosk for a day of fun, learning and games. Nine docents took the kids, divided into age groups, out on the trails to see, hear smell, and touch nature.

When a log was turned over in the moist leaf litter along the trail, excited kindergartners whooped and hollered at the several flesh-colored earthworms writhing to get back in the darkness of the rich soil under the log. Picking them up the kids noticed the slimy wet feeling and one that “pooped” on a girl’s hand…all very natural. They read the words on the stone signs naming trees alongside the trail (called them “clues”)…oak, red, tree…some recognition crept into their young and inquisitive minds.

Our group of 3rd and 4th graders were each given an identical bag of “natural” building supplies consisting of objects found at South Fork. They hiked the trails as a group talking about the natural habitats of creatures living at the nature center. Fox dens, spider webs, birds nests, carpenter bee infested trees were just a few of the “habitats” observed. After hiking, the students independently worked at creating a habitat for a real or imaginary animal. They used donated pizza boxes as their stage and presented their creations to the group-once again reinforcing what they learned about habitats and the impact humans can have on them. They really did get creative…competition was keen for the best creative art design!

Seventh and eighth graders examined the emerging milkweed populations planted a year ago to enrich the glade habitats for the monarch butterfly populations in the South Fork area. They ran statistics on the numbers of plants surviving the summer and winter conditions which involved moisture, temperature and herbivore activity.

12:00 noon…time to be back at the Riddle Cabin for lunch at the picnic tables; the warm, humid day caused many iced bottles of water to be opened for a good cool-down. Some lunch-time conversations centered around what life in the 100 year old log cabin, where Granny Riddle had grown up, must have been like (many kids noticed that they could not have plugged in their tech devices).

Lunch being over, one group of kids followed a docent on a trail-side game activity…another group carried the long, 5 foot cross-cut saw (a handle at each end) to the big 16 inch log awaiting saw action. As sawdust fell on each side of the log, students were reminded that the saw had cut through rings of wood growth laid down during times when particular activities of the years had occurred (16 or so rings into the log was when the twin towers in NY had come down…etc.). Trees of the forest continue to put on rings of wood, one or more a year, documenting the history of each year; oak, hickory, pine, each grows ever larger on the forest floor.

As 1:00 rolled around, Mike Wells, their junior high principal and bus driver, noted the time to return to campus…the day was about to end at South Fork…it had been another grand experience out in nature!!