It was Tuesday, April 9, when St. Joe 10th graders, 28 of them, came to South Fork for the day. Their biology teacher, Jim Belote, had just introduced them to plants and animals in the classroom and they were anxious to be out in the woods where they could see, first hand, the ecological relationships of organisms in their environments. Organisms in an ecosystem interact with one another and their environment having some influence on the life around them: trees to trees, environment to trees, animals to animals, trees to animals, animals to environment, etc. The bus arrived at 9:00 AM, unloaded at the front stone entrance, and were welcomed by Don Culwell and Steve Smith. Don spoke of their day’s activities and the program that was planned. 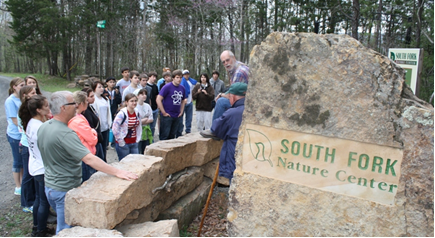 Along the fifteen minute walk on the trail to the Riddle Cabin, several stops were made pointing out different species of trees and the varying bark patterns (very light colored, scaly bark of the White Oak; black, ridged, tight bark of the Red Oak; reddish-brown patches of loose bark on the Shortleaf Pine); Trout Lilies that had recently bloomed (their white petals having already fallen) were showing large fruits on their tall stems that had bent over in the leaves…seeds were developing for the next generation of mottled leaves that would grow above the small, Trout Lily bulbs just below the surface of the soil. Further along, a large pile of huge, scattered chips of light colored wood lay near the base of an old dead tree at the edge of the trail…some Pileated Woodpecker had just made the chips fly as it noisily pecked away in search of insect larvae (the sight of that big, red-crested woodpecker in action would have been some sight to behold)! Along the trail, the tiny, red leaves newly emerged from the buds of the White Oak seedlings caught our attention…the red coloration that, at first glance, resembled some flower, was just red leaf pigmentation that was protecting the new, tender, growing cells of the leaf from the intense radiation of light. Of course, the forest canopy had just begun to sport tiny leaves that soon would form an umbrella over the forest floor cutting out much of the light that the spring flowers below needed for their growth: Mayapples with their umbrella-like leaves and one, single white flower yet to bloom; the white Toothwort flowers atop a six inch stem, in the mustard family; a few purple Violets; and some white petaled Spring Beauty flowers. Heard up in the treetops was the “peter…peter…peter” call of the Tufted Titmouse as it called back and forth to other members of the species in the forest canopy.

Arriving at the log cabin, schedules were checked, three groups were formed, and docents led students out on their walks into the woods (Steve Smith and Larry Bintliff led investigative walks checking out the trees and whatever life could be found while Jim Solomon focused his group of students on insect life along the way).

An hour and 15 min. later, three other docents took over the groups for a study of wildflowers and their functions (Don Culwell), food chains and food webs (Janet Miron and Glenda Hall), and an art drawing project featuring tree and leaf structure, texture, and design (Joyce Hartmann).

Lunch at the tables outside the cabin was welcomed for a brief rest from the activity of the morning; before long, however, a hike left for the trek over the trails to the waterfall area through another section of South Fork. Water was running down the rock bed of the small creek that drains the surrounding hills…small pools and runoff areas were green from the growth of algae. Now in the spring when the season is more blessed with rain, the pour-off of the waterfall into a channel to the lake was spectacular around the large rocks. This was the place where all students wanted to climb for a better view from all angles of the splashing, rushing water below.

Back at the cabin shortly after 1:30 the class was found doing a quick recap of the day’s activities and the meaning of their encounters. The weather had been grand with the temperature near 80 and sunshine falling through the trees to brighten the forest floor. Good-byes were said as students headed off to board the bus for the school campus in Conway.