The Little Red River Audubon Society held its annual potluck picnic followed by an “Owl Prowl” at South Fork Nature Center in Choctaw October 28th. A dozen members enjoyed fried chicken together with all the trimmings at the picnic tables by the old Riddle cabin, with a campfire nearby to add atmosphere.

As it got dark after the picnic, members put red cellophane over their flashlights to enhance night vision while walking safely, and LRRAS President Bob Hartmann led the group on a night hike along the loop trail near the bluff. A bird-calling app, iBird Pro, was used to play the calls of the Eastern Screech Owl and other native owl residents. 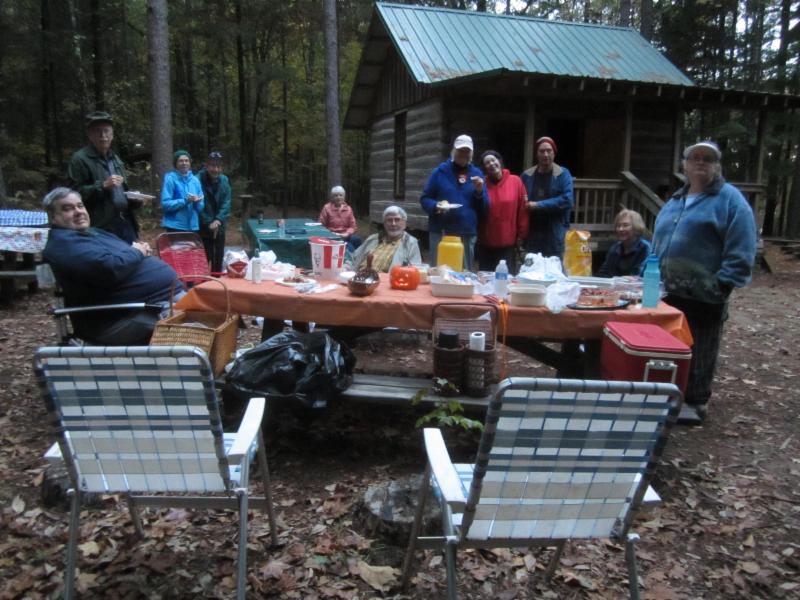 The group called up three Great-horned Owls during the walk: two across the lake and one in the woods near the Nature Center. The owls continued calling and answering throughout the hike.
Owls can be heard throughout the winter months as they do their territorial and nesting calls. Calls of the four main native owls are easy to distinguish. The Screech Owl calls in a rapid high-pitched tremolo. The Great-horned Owl is usually a series of lower toned hoots. The Barred Owl says “Who cooks for you? Who cooks for you-all?!” ending in a down-note slide. The Barn Owl sounds somewhat like a woman’s scream, a scary sound, and people sometimes mistakenly think it is a Bobcat.

The evening was beautiful, with temperatures in the 60s. A rain in the morning made the walk silent among the leaves, and Amanita, Indigo, and other mushrooms grew everywhere in the woodlands, gleaming red with the glint of passing flashlights. Everyone enjoyed the night’s adventure.

Meetings of the Little Red River Audubon Society feature field trips and helpful programs about birds, and are generally held at 5 p.m. at the Western Sizzlin Steak House in Clinton the fourth Tuesday of each month. For more information about LRRAS or to join, ask any member or call 745-6615.