Joe has been instrumental in providing guidance and funding for SFNC’s recent Glade Restoration Project and our Monarch Butterfly Habitat restoration program. We are thankful for his expertise and never-ending support of SFNC.

The Southeast Region Partners for Fish and Wildlife Program provides technical and financial assistance to private landowners interested in improving habitat for migratory birds, endangered, threatened and at-risk species. They particularly emphasize projects with the potential to provide habitat for rare, threatened and endangered species. The “Partners” program is helping SFNC in their forest enhancement through mid-story management and prescribed burning.

According to the SFNC Woodlands Restoration Plan,

“The expected benefit to Federal Trust Species is to improve habitat conditions for the Northern long-eared bat, which is listed as a threatened species, several at-risk species including Monarch butterfly and Texas Frosted Elfin, as well as the species of greatest conservation need identified in the Arkansas Wildlife Action Plan: Bewick’s Wren, Eastern Whip-poor-will, Rufous-crowned Sparrow, and Slender Glass Lizard.”

Tree stand management is the latest development in our SFNC Woodland Restoration Plan. The Foothills Master Naturalists (FAMNs) and Clint Johnson with the Arkansas Game and Fish Commission have worked hard keeping our trails and structures cleared of leaves, as these trails will serve as fire lines for the prescribed burns scheduled at SFNC. An attempt to burn was made in early November but was unsuccessful. The TNC Burn Team will try again when all the conditions line up for a perfect prescribed burn. Afterwards, forester Wade Hargrove will supervise a selected commercial harvest to improve the health of our tree stand and open our canopy to improve ground herbaceous growth, which improves the habitat for many native species.

Please stay tuned for our third article about this restoration project. We look forward to reporting on the latest progress.


Tuesday, October 3, the crew working in the forest and glades was there, boots on the ground, equipment close at hand. South Fork acres were being prepared for the their first controlled burn to be professionally conducted sometime the last two weeks of November whenever weather will permit (proper moisture in the ground, relative humidity, air currents, etc.); the timing of the burn late in November will allow necessary time for protection of the bat populations that call SFNC home.

A controlled burn of approximately 40 SFNC acres will be a part of the restoration process of returning the forests and glades to a condition similar to that noted in a number of historical records from across the state. With the forest canopy opened up by a thinning of existing tree species and removal of unwanted surface seedling growth (pine, cedar, and certain hardwoods), herbaceous growth (forbs and grasses) can return to open areas between trees. Restored glade areas can exist for flowering plants useful to pollinators like butterflies and bees. Fire lines extending from established trails to surround the burn areas were cleared by Clint Johnson on Tuesday, a private lands biologist from the Arkansas Game and Fish Commission.

While Clint was getting the woods and glades ready for the controlled burn, Wade Hargrave (Hargrave Forestry Management Service) and his crew were employing a “hack and squirt” procedure that will kill treated trees allowing a thinning of the forest stands. Hatchets hacked open areas in the bark into which the poison, arsenal AC, was sprayed with a squirt bottle; treated trees will die in about 6 months and become habitat for woodpeckers, insects, fungi, etc. Wade also began marking with blue paint the larger trees that are to be removed in the harvest for timber sale. So, forested areas will be opened up and glade areas cleared for herbaceous growth. Don Culwell marked a number of mostly larger specimen trees using colored flagging, trees that were to be kept for species diversity as well as aesthetic beauty of the Nature Center (flowering dogwoods will be protected in the process).

The restoration process written for SFNC by Clint Johnson is now in full swing (the US Fish and Wildlife Service has previously funded SFNC glade restoration in 2014, 2015; Witsell and Baker, 2006, conducted a plant and community analysis of South Fork Nature Center).

A portable sawmill is site at SFNC and now beginning to process the numerous logs produced by the Glade Restoration Project. Some of the milled lumber will be used to construct key area structures
needed for maintenance and equipment. First products to be milled include posts, rails and pickets for a ‘hog tight’ old time picket fence to be placed around the cabin area.

Weather permitting, mill operations will be in the early hours, before noon
on week days only.

Our glade restoration and milkweed planting funded by the US Fish and Wildlife Service was visited by Joe Krystofik, State Coordinator for the Partners for Fish and Wildlife Program. We have been working on the clearing for the glade restoration on in 3 areas of the Nature Center amounting to approximately 10 total acres. We have successfully planted approximately 400 milkweed plants in the glade areas. For purposes of the Federal grant these two projects are not considered finished by USFWS. We will be doing a controlled burn in these areas probably in late winter next year. This should cause the relic seed bed to spring in to life next Spring.

Cedars and occasional hardwood trees have been removed from nearly 10 acres of South Fork glade ecosystems at this time….several acres remain for the restoration process. With the heavy tree canopy providing excessive shade above the glade surface, typical flower and grass vegetation is unable to grow.

Eight men have been assisting Tony Millsap and his crew on several different days in the tree removal process of the restoration including one area that is so sensitive with orchid populations that extreme care is needed in keeping excessive activity and machinery out of the area.

Following tree removal, glades will be visibly enhanced with several species of milkweeds (Asclepias) in an attempt to attract monarch butterflies. The US Fish and Wildlife Service is helping fund the restoration and milkweed growing project.

About two weeks ago our new directional signs at 7 trail junctions were installed and are a great new addition to the trail system. We will soon have 7 new informational signs on the newest part of the trail. 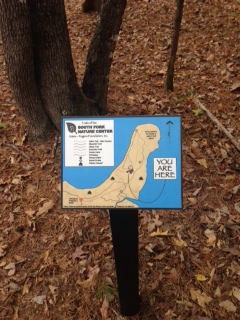 We have begun cutting again on the second area of the Glade Restoration project. This area is approximately 3 acres and was about half cut last year. We will also move directly to the 5 acre area once this one is cut over. Because of the restoration work going on, the Nature Center will be closed until January 2015.

The US Fish and Wildlife Service is also providing money to enhance habitat for monarch butterflies. We will be planting milkweeds in the glade areas to provide this needed habitat.

Project work began in mid November with Eastern Red Cedar removal from the first (the Seep Area) of three selected glade areas. All unmarked cedar is being cut at their base and removed. Trees marked with orange tape are being left in place. Downed trees are hauled out to adjacent road and parking area edges where topping, trimming and log separation is performed and for temporary storage.

In the last photo is an unusual, very edible ‘Lion’s Mane’ mushroom in prime plucking condition – but it wasn’t, only photographed!

Larger tops are to be moved to Corps of Engineer assigned drop-off sites to be used for fish habitat and attractor construction. Logs of fence and construction value will be relocated on property for future use. Trimmings will ultimately be burned in the roadway/parking area or moved to a suitable nearby burn site. Work on the second Glade site is underway.